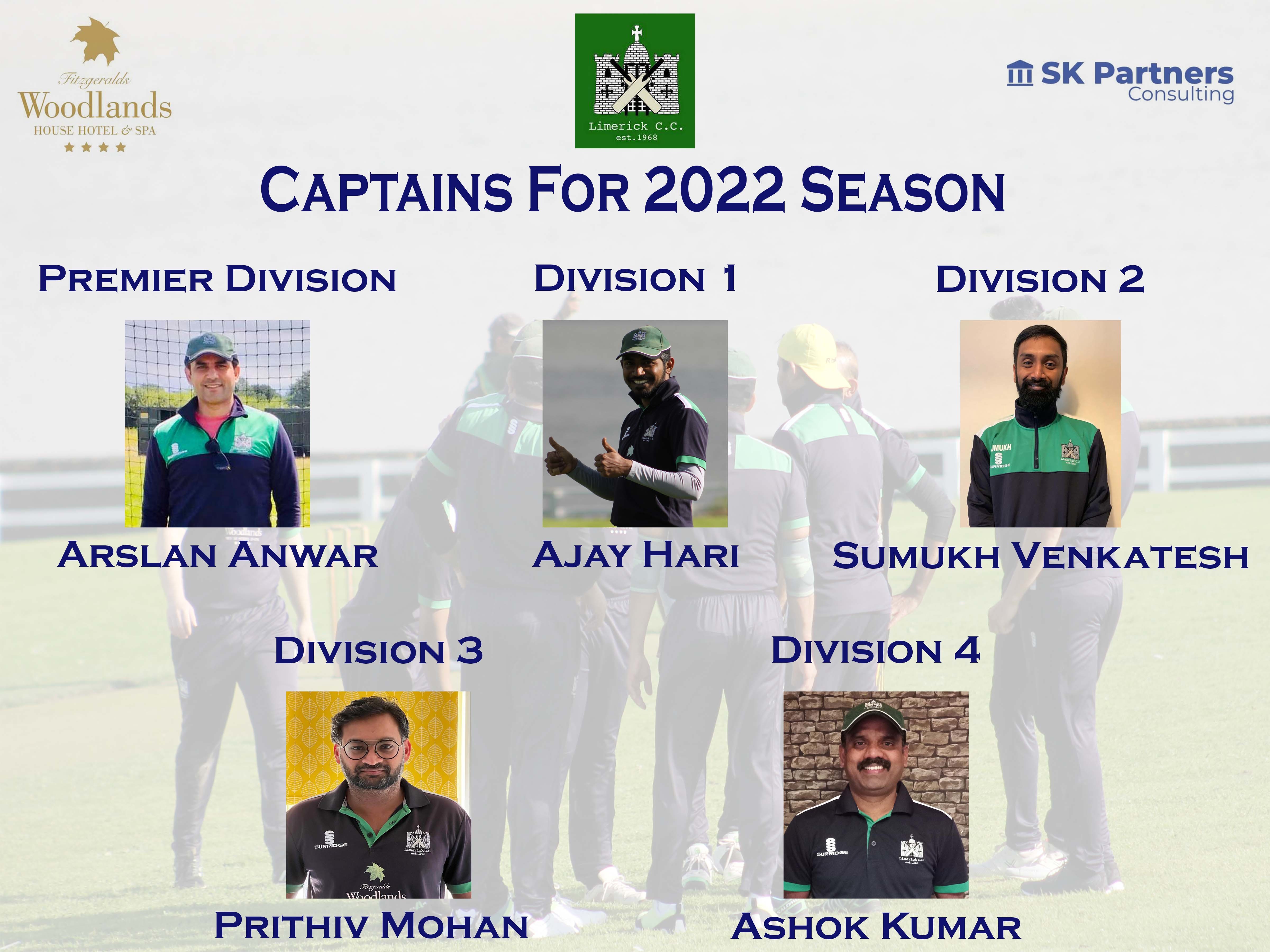 LCC would like to announce the captains for 2022 and wish our captains the best of luck for the upcoming season .

We asked the captains 5 questions about themselves, see below for each of their answers.

Arslan lead the first team to historic Senior League title in the 2020 season, the club's first in 15 years. He managed to score the most runs in premier league last year, Arslan will retain his position as the club captain and looks forward to what could be another successful year for Limerick CC at senior level.

Favourite Cricketer & Why - AB De Villiers, The most versatile Cricketer.

Your motto for life - Always be a little kinder than necessary.

After a successful 2021 season winning the Junior League Ajay Hari will retain his position as the 2nd XI captain. Ajay Hari is known for including youth cricketers in his team and create opportunities where he was able to extract their best without any pressure on their shoulders.

Your motto for life - Be inspired and be inspiring.

Proudest Moment in cricket - Captaining a team with 7 u16 members in divison 2 and winning the Minor T20 cup.

Sumuhk won the Divsion 2 Bowler of the year award last year and has been an integeral part of Division 1 and Division 2 teams last year. An indiviudual with strong passion and love towards the sport takes on the challenge of captaining Division 2 team where he will be eyeing for victory and development of youth cricketers.

Favourite Cricketer & Why - Jacques Kallis, An amazing allrounder with Batting average of almost as Tendulkar & bowling average of Zaheer Khan.

Your motto for life - Make my Idols as Rivals.

Proudest Moment in cricket - Being a part time bowler and picking a fifer.

Stepping into 6th year with the club, Prithiv has captained and managed to win the Division 3 T20 trophy twice in the past 2 seasons. Prithiv displayed some admirable qualities and a good knowledge of the game and would be eying for another successful season.

Favourite Cricketer & Why - Sourav Ganguly, the best captain Indian team has ever had.

Your motto for life - Keep it simple, enjoy the moment.

Ashok who is stepping into his 2nd season with the club has managed to grab the eyes of most players with his enthusiasm and love for the game. He has been elected as the captain for the newly formed Division 4 team where he will play a key role of integerating youths into adult cricket.

Favourite Cricketer & Why - Rahul Dravid, is the embodiment of the Spirit of Cricket. For those of us who genuinely love the game of cricket, He is the perfect gentleman in the gentlemen's game.

Your motto for life - Don't let your fears kill your dreams.

Limerick edge out Wexford in narrow one wicket victory in...

It was scenes of jubilation in Adare on Saturday as Lime...

With the 2022 season confirmed to start from mid April an...

Limerick Cricket Club is delighted to announce our offici...

LCC would like to wish our four captains the best of luck...

The club would like to wish a massive congratulations to ...

Training continued for both youth and adult cohorts this ...