Limerick edge out Wexford in narrow one wicket victory in Adare 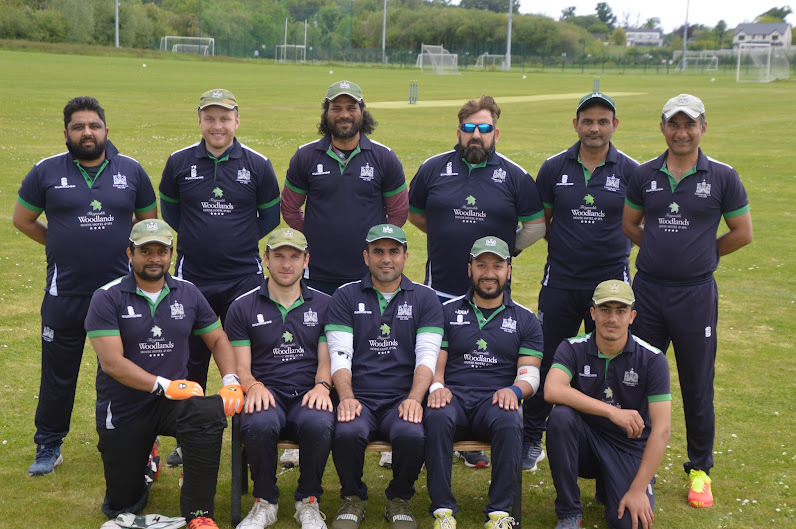 Published: about 1 month ago

It was scenes of jubilation in Adare on Saturday as Limerick CC clinched victory from the jaws of defeat in a thrilling finish to their first round tie of the Clear Currency National cup.

Limerick Cricket Club secured a one wicket victory over Wexford at the weekend to get through the first round of the Clear Currency National Cup.

Wexford came back strong in the final ten overs of the Limerick innings and looked set to defend their first innings total of 171 but Limerick’s tail wagged until the very last wicket.

When all looked set for a narrow loss, Limerick’s number 11 batsman Mirhamza Ahmedzai, the star of the show in last week’s win against Cork Harlequins, came to the crease and made consecutive boundaries to score the eight runs needed.

Skipper Arslan Anwar wasn’t too disheartened to lose another toss as his team have enjoyed fielding first on recent occasions.  However it was the away side that took the early initiative with some T20 style batting, the pace of the new ball doing the work with some 6s thrown in to the mix also.

Limerick needed a breakthrough at first change, Usman Khan picking up both openers in the space of two overs to leave the rampant Wexford 80-2 after 11.

Incidentally, dismissing both openers was the impetus the home side needed to kick on. Usman continued to chip away as some loose shots from Wexford presented chances to Limerick which were dually taken.

70-0 became 130-8 within the small timeframe of an hour or so, Limerick dismantling any partnerships in fine fashion.

Off spinner Farman Yousafzai came on with the skipper providing the same from the other end. Economical spells from both limited Wexford’s scoring opportunities and boundaries were few and far between for a large part of the innings, The Treaty men keeping it tight in the field and squeezing the pressure back into the middle.

A final wicket stand of 32 runs off just under 7 overs gave the away side a more defendable total, with Limerick acting slightly more complacent in the final stages. Nonetheless, a total Limerick new was well within their rights to grab as the expected showers held off and kept the outfield nice and dry for the remainder of the match.

It was Wexford who won the early battles during the Limerick chase. Ahmed Khan was unable to keep out a fullish delivery whist a mixup between Tim Smithies and Azeem Khan provided the opportunity for Wexford’s second wicket, a run out which would see Azeem gone for 15.

A strong partnership of close to 100 runs for the third wicket looked to have Limerick on their way, with skipper Arslan Anwar picking up a half century in the process. But when both batsmen fell after drinks, with another run out after Anwar was found well short of his ground from a direct hit from mid-off, Wexford were suddenly well back in it.

It was Limerick that still held the main advantage despite losing their two main batsmen as the Shannonsiders still had six wickets in hand with over ten overs remaining.

But Wexford were far from finished, and got back to some tight lines and deprived the home side of boundaries as the end neared. Limerick continued to lose wickets with the run rate hovering at around 7/8 an over.

With 13 needed from the final over, the experience of Farman Yousafzai paid dividends as he sent the first ball straight over cow corner for six as the deficit reduced to needing seven from five. Two was called off the next ball and the non-striker John Daly fell victim to some sharp fielding, departing for no score and leaving just Limerick’s final bat, Mirhamza Ahmedzai, on strike needing seven from just four balls.

With Wexford needing just one more wicket and Yousafzai at the other end, momentum was on the side of the bowling outfit. But when the next ball was tickled down the leg-side for four, the game was back on, and three runs were needed from three balls. Astonishingly, the next deliver looked full and destined for middle stump, but Ahmedzai was able to step into the shot and play a cool flick off the pads past square leg to the vacated leg-side boundary!

Limerick somehow pulled a win from the fire but showed great resilience in what was a thriller of a game which swung in the favour of both sides drastically until the final over. Limerick await the draw to see who they’re opponents will be for the second round.

Elsewhere, Limerick’s u15s were short of victory in their Super Cup game against Cork County on Sunday afternoon. Limerick bowled first and took the early wicket of Hashim, a big LBW shout off Ayan convinced the umpire and Limerick got the much-needed breakthrough.

However Limerick were up against it after this with some strong shots finding boundary after boundary, the bowling side struggling to contain the middle as County accelerated whilst keeping wickets in hand.

They would eventually finish on 179-8 from their 30 overs with Limerick needing 180 runs (exactly a run a ball) in reply to seal victory.

But the response was not as strong with Limerick failing to consolidate any partnerships with wickets tumbling. Only Zaki Khalid, scoring 22 runs, could offer any resistance as he began to run out of partners. It wasn’t to be as 79 runs is all that could be mustered with the bat resulting in Limerick being all out within 25 overs.

There is an action-packed ten days ahead for the club with fixtures coming thick and fast in what will be a busy period.

This Wednesday, Limerick will play host to the Limerick Blasters in an evening game at Adare. The weekend sees the first round of the Junior T20s in Tralee with the final game of round 1 taking place the following Wednesday at the newly formed Croker’s Oval in Ballyneety.

History in the making as it will be the first Limerick derby to take place outside of Limerick CC’s home ground of Adare. Finally, the first team will look to continue their run in the league when they play Kerry at home in a crunch game in the Premier League, whilst the 4th XI will lock horns with Lismore in Adare on Saturday in the third division.

Hot streak continues for Limerick with thumping win over ...

A fine run of results continued in ruthless fashion as L...

Old rivals reunite as Limerick and County set up mouth-wa...