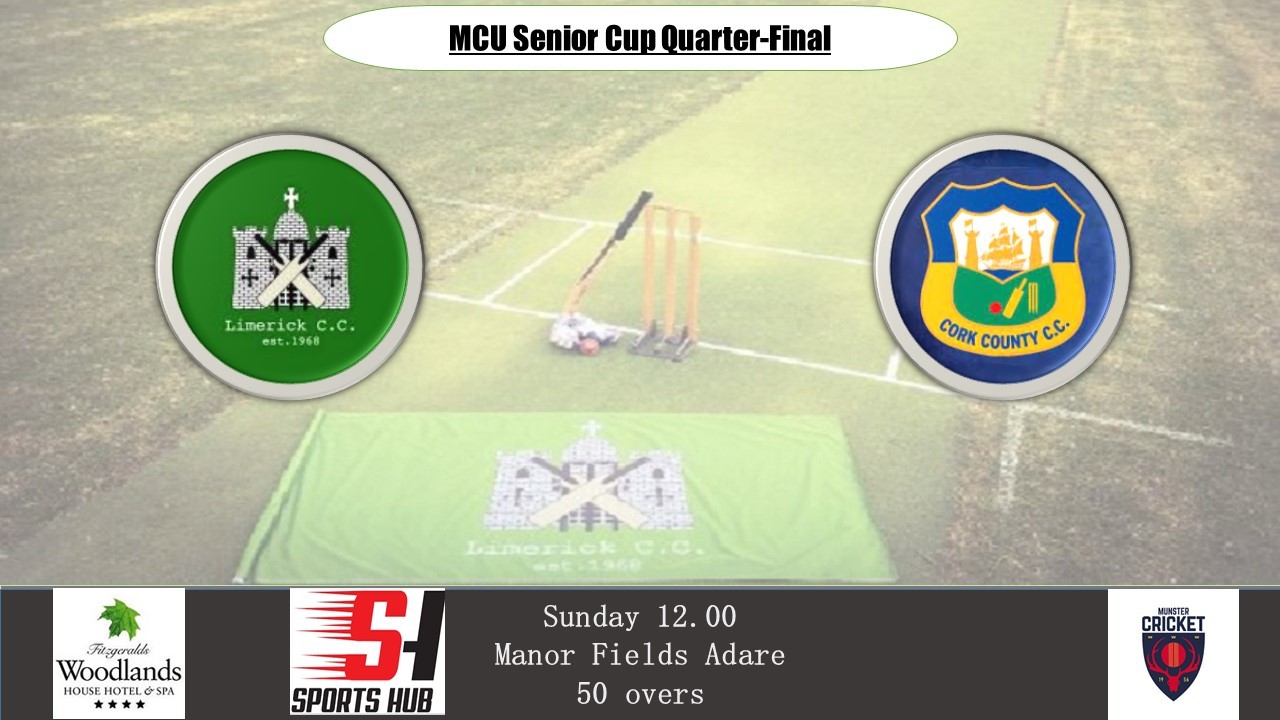 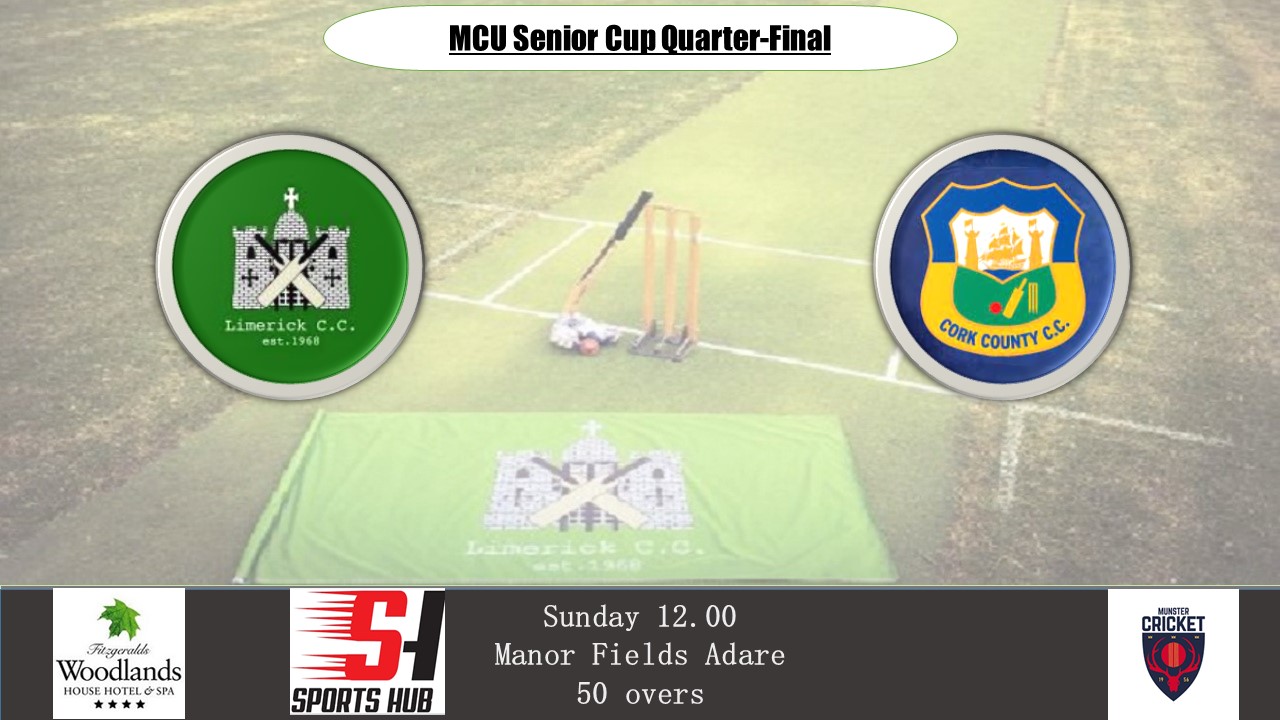 What happened the last time the two side met..

County will come into the game as favourites having outdone the Shannonsiders on all three occasions last season. In similar circumstances, Limerick elected to bat first in all three matches with County chasing down each total and running out eventual winners, only losing four/five wickets on each occasion. In this respect, 200 runs may be a below par score on Sunday. But with multiple changes to both sides and a changed outfield in Adare, you can be sure for some unexpected twists and turns throughout the afternoon.

The home side come in with the better record this year. A mixed season so far for Limerick has left them somewhat short of assurance. Wins against Quins and Wexford brought confidence whilst big losses to Midleton and Kerry left questions to be answered. County on the other hand haven't found results in Leinster thus far with league form not too assessable with jus the two games played. Both teams incidentally will be looking to bounce back from heavy defeats in their last games.

What's the team news for the home side?

Limerick bring in one change to their starting XI with Victor Van Der Schyff departing for the in-form Arslan Sayyam. The Pakistani native proved his worth on Wednesday with a superb knock in Limerick's Junior T20 win over the Limerick Blasters. Although a big step up, an opportunity to make the opening position his own with Limerick having different opening batsmen in every game this year. Farrukh Bhagat returned with a stellar performance behind the sticks on Sunday with some superb reflexes on show. He is kept as the team's wicket-keeper with the rest of the playing XI retaining their place. 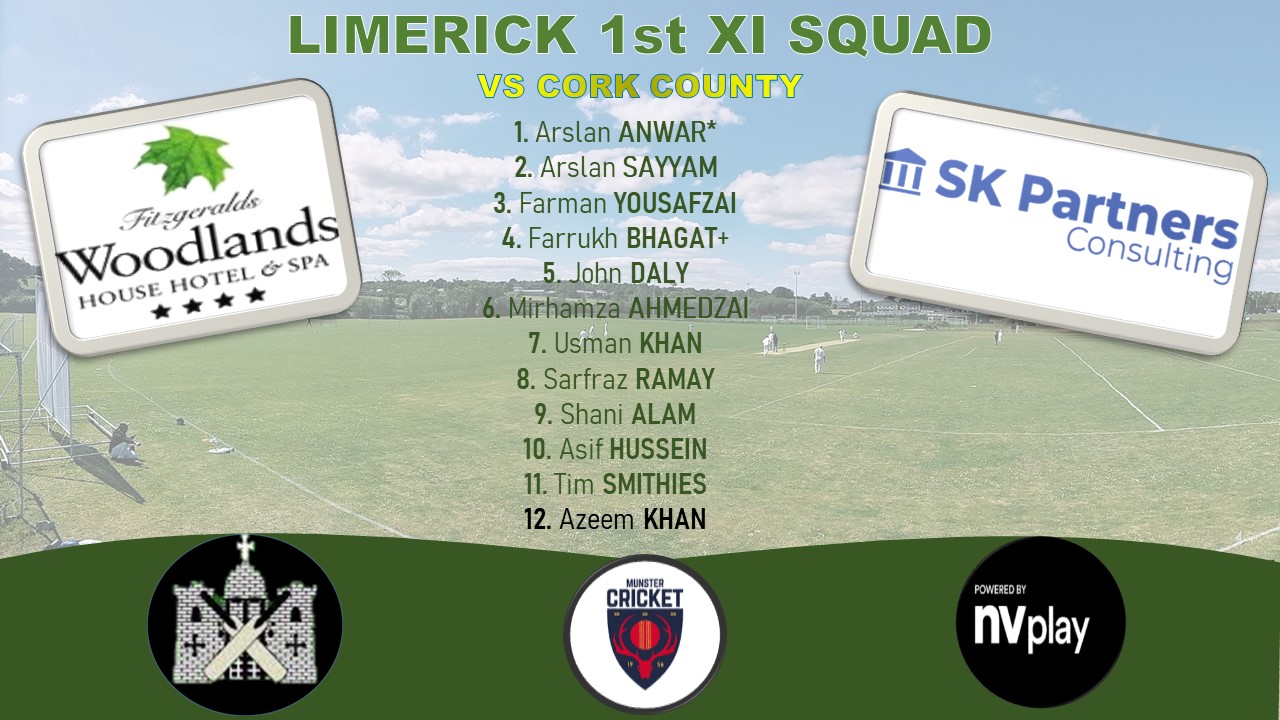 Cork County expect to be unchanged for today's game after sustaining no injuries or other setbacks for the weekend.

It's no doubt that both teams come into the game in need of wins to really kickstart their respective seasons. The stakes therefore become even higher with a place in the semi-finals up for grabs. Limerick have backed their home form in recent years to get them over the line with the Manor Fields becoming somewhat of a fortress across the divisions. But recent form may have a part to play in both team's preparations with top order batsmen struggling to find runs. It seems County will be relying on Ross Durity with the bat on Sunday whilst Byron McDonough looks to be the go-to man with the ball. Limerick's bowling has been a breath of fresh air this year with youngster Mirhamza Ahmedzai enjoying his breakthrough year at the top level. He'll be looking to put a dent in the away sides hopes with the new ball. Limerick have struggled to put value on their wickets at senior level so far this year, and come into the game knowing time at the crease is invaluable in cup cricket.

This quarter-final sees the clash of two old rivals in Munster Cricket, having met each other many a time in the 80s and early noughties in senior cup rounds, including a few finals. The Senior Cup this year will be played in coloured kit with white ball, which may have an impact on both teams' approach to what should be an enthralling affair.

Hot streak continues for Limerick with thumping win over ...

A fine run of results continued in ruthless fashion as L...

Arslan Sayyam hits second century of the season in comfor...

It was nothing short of a drubbing at the Croker's Oval l...